All three of Virginia’s venomous snake species (northern copperhead, eastern cottonmouth and timber rattlesnake) are pit vipers. The “pit” in pit-viper refers to the heating sensing pit located between the eye and the nostrils on the snake’s head. In addition to the heat sensing pit all three venomous snakes in Virginia have vertical pupils. All harmless snakes in Virginia have round pupils and lack the heat sensing pits. 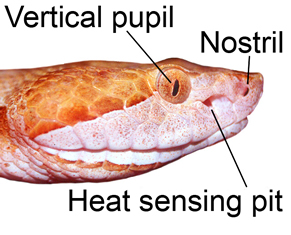 While close inspection of a snake’s face and/or its bum is a definitive way to distinguish a venomous snake from a harmless species, it requires one to get dangerously close to a potently dangerous animal. It is far better to learn the pattern and coloration of a few snakes so that a specimen may be identified from a safe distance.

Copperheads are found throughout Virginia and play a pivotal role in controlling rodent populations. Without copperheads and other rodent eating snakes there would be a drastic increase in crop/food damage and rodent spread diseases. While Copperheads are venomous they are very placid snakes that only bite if stepped on or otherwise threatened. Look for a yellowish, “copper” colored head and hourglass shaped dark blotches that stretch from side to side of the snake. If you see a copperhead, leave it alone and rest assured it will do its best to avoid you. 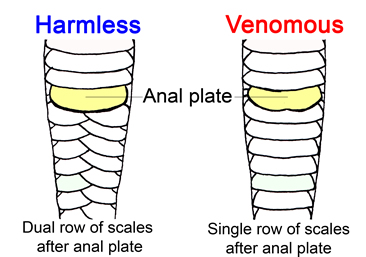 Eastern cottonmouths are found in the south east corner of Virginia. Cottonmouths are a yellowish olive to black with about 13 black crossbands that are wide on the sides and narrow as they approach the backbone. Some of the crossbands may be broken, not meeting at the backbone. The outer edges of the bands are usually black. Crossbands get darker as they approach the tail. Older adults may be a uniformed dark color, usually black, without a discernable pattern. The name “cottonmouth” refers to the manner in which the cottonmouth notifies other animals including humans of its presence. Opening of the mouth and flashing the inner white lining is not an aggressive action, it simply makes the cottonmouth more visible. Despite common folklore, cottonmouths do not chase after people.

The Timber Rattlesnake is found throughout the western part of the state – especially in the Blue Ridge. They have a short tail and rattle with a stocky body and. Coloring can range from a yellow or tan ground color with dark brown or gray bands to a black ground color with a black or gray head. Their main diet is made up of rodents. Timber rattlesnakes are active both day and night during the warm summer months. They can be found basking on sunlit rocks or hiding along rodent trails and spend the cold winter months overwintering in dens found in cracks and crevices on steep slopes. Timber rattlesnakes require a long term stable winter shelter, a wooded area for foraging.

Ok, so what can you do to keep snakes away from your house? Keep the grass mowed and remove any debris that a snake might think is a good hiding place, like piles of brush and stone. If you happen upon a snake, give it a wide berth. Stay at least 6 feet away and don’t do anything to aggravate it like throwing stones, poking it with a stick or trying to catch or kill it. LEAVE IT ALONE!!

If bitten, keep calm and seek medical attention as soon as possible. Do not use a tourniquet, cut or suck the venom out or put ice on the bite. These actions can actually cause more damage. Do not attempt to catch the snake. This action usually results in a second bite.

Whether you are out on the trail enjoying a hike or in your back yard enjoying the last days of summer, please be aware and alert at all times.